1.a diagram showing the interconnections between the components of system (especially an electronic system) 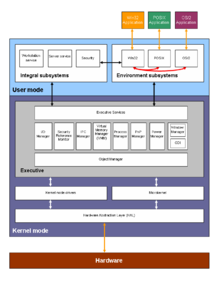 Block diagram is a diagram of a system, in which the principal parts or functions are represented by blocks connected by lines, that show the relationships of the blocks.[1] They are heavily used in the engineering world in hardware design, electronic design, software design, and process flow diagrams.

The block diagram is typically used for a higher level, less detailed description aimed more at understanding the overall concepts and less at understanding the details of implementation. Contrast this with the schematic diagram and layout diagram used in the electrical engineering world, where the schematic diagram shows the details of each electrical component and the layout diagram shows the details of physical construction. Because block diagrams are a visual language for describing actions in a complex system, it is possible to formalize them into a specialized programmable logic controller (PLC) programming language. A Function block diagram is one of five programming languages defined in part 3 of the IEC 61131 (see IEC 61131-3) standard. Since this is a real, bona fide computer programming language, it is highly formalized (see formal system) with strict rules for how diagrams are to be built. Directed lines are used to connect input variables to function inputs, function outputs to output variables, and function outputs to inputs of other functions. These blocks portray mathematical or logical operations that occur in time sequence. They do not represent the physical entities, such as processors or relays, that perform those operations. Each block is therefore a black box. The rules require the logical sequence to go from left to right and top to bottom.

To make an analogy to the map making world, a block diagram is similar to a highway map of an entire nation. The major cities (functions) are listed but the minor county roads and city streets are not. When troubleshooting, this high level map is useful in narrowing down and isolating where a problem or fault is.[2]

Block diagrams rely on the principle of the black box where the contents are hidden from view either to avoid being distracted by the details or because the details are not known. We know what goes in, we know what goes out, but we can't see how the box does its work.[3][4]

In electrical engineering, a design will often begin as a very high level block diagram, becoming more and more detailed block diagrams as the design progresses, finally ending in block diagrams detailed enough that each individual block can be easily implemented (at which point the block diagram is also a schematic diagram). This is known as top down design.[4] Geometric shapes are often used in the diagram to aid interpretation and clarify meaning of the process or model. The geometric shapes are connected by lines to indicate association and direction/order of traversal. Each engineering discipline has their own meaning for each shape.

In Biology there is an increasing use of engineering principles,techniques of analysis and methods of diagramming. There is some similarity between the block diagram and what is called Systems Biology Graphical Notation. As it is there is use made in systems biology of the block diagram technique harnessed by control engineering[5] where the latter itself is a an application of control theory.this diagram is describes total information about processing.