1.an operator of an elevator 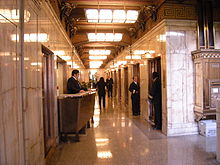 The Smith Tower in Seattle, Washington continues to use elevator operators as of 2008.

An elevator operator (in British English, usually lift man, lift woman, or lift girl) is a person specifically employed to operate a manually operated elevator[1]. Besides their training in operation and safety, department stores extended the roles of operators as combination greeters and tour guides, announcing products, floor-by-floor, and occasional sales.

In more modern buildings, elevator operators are still occasionally encountered. For example, they are commonly seen in Japanese department stores such as Sogo and Mitsukoshi in Japan and Taiwan, as well as high speed elevators in skyscrapers, as seen in Taipei 101, and at the Lincoln Center for the Performing Arts.

Some monuments, such as the Space Needle in Seattle and the Eiffel Tower in Paris employ elevator operators to operate specialized or high-speed elevators, discuss the monument (or the elevator technology) and to help direct crowd traffic.

Theme parks and amusement parks often have observation towers, which employ elevator operators. An example is the Sky Tower at Six Flags Magic Mountain in Santa Clarita, California. While these rides may have modern or button-operated elevators that a patron is capable of using, these rides often employ ride operators for safety and crowd control purposes.

Because many jurisdictions have stringent injury liability laws for amusement park operators and the fact that vandalism can be a big problem, some parks do not allow patrons to ride these rides without an employee present. Additionally, if there is a museum at the top of such a ride, the operator will usually give an introduction to the purpose and contents of the museum and other promotional messages about the park.